A holiday with a romantic quest

Earlier this year my husband and I set out to holiday in South Africa – the land of my birth and youth. One important reason was to verify aspects of my parent’s lives – notably the romantic beginning of Fred and Ethel Cope as a couple.

Let me tell you a little of their story. In August 1942 the fifty two year old bachelor, Fred, had bordered a Japanese ship, the Tatuta Maru, in Shanghai. He had spent 2 years as a prisoner of the Japanese in Canton (Guangzhou) South China. For 9 months he had been held in solitary confinement. Then Britain and Japan decided to exchange prisoners. Fred was one of those chosen to travel on the very first exchange ship bound for England. How Fred came to be in South Africa instead of England is a story for another day. For now I’ll pick up the story at the Cathedral Peak Hotel in the magnificent Eastern Drakensberg Mountains. Fred had secured a job in Johannesburg but first he was sent to the mountains to regain his strength after a punishing voyage. This was the hotel where he stayed. The peak on the right is Cathedral. 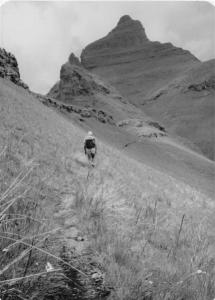 Two months of gentle recuperation rendered Fred fit to climb Cathedral. Soon after this Ethel Glaister, acting matron of Harrismith Hospital, arrived and soon noticed Fred. Once she discovered his history her interest moved up a scale.
It was on 1 December 1942 that they first met. They hit it off from the start despite their twenty year age difference. Neither had been married before. Soon Fred felt out of control. He had fallen head over heals in love with a South African nurse who had turned up when he was feeling human again. Always decisive, once he had weighed the options, Fred couldn’t hold back. So, on 12 December 1942 he popped the question.
Ethel was bowled over by the unexpected proposal. Within a few days she was due back at Harrismith hospital and Fred to Johannesburg and then to England. It was ‘now or never’. She had to make up her mind fast. She did! “I just can’t say no was her reasoning! Things sped up. They were married in Johannesburg 9 days later on 21 December 1942. Despite some bumps and scrapes along the way they did live happily ever after!

This story is a peephole into my father’s life – biography currently ‘under construction’:
ONE MAN THREE LIVES – The Man who would never give up.
Publication will be announced on my website www.toniacopebowley.co.uk

This entry was posted in One Man Three Lives. Bookmark the permalink.